Assynt has some glorious beaches which rival the Caribbean with their soft white sand, azure seas and gentle slope underfoot for safe swimming. It is not unusual to see dolphins frolicking in the bay, and with the main ocean current coming from the Gulf of Mexico, the water is a wee bit warmer than you might imagine.

During the quiet months, a walk along the beach on a fresh, windy day is guaranteed to soothe the soul and make you feel alive. On the very edge of Scotland, with hardly another soul around, modern civilisation and all the stresses that come with it, are soon forgotten.

We particularly love the narrow coast road from Lochinver to Kylesku, that twists and winds along the varied coastline of cliffs and clean sandy beaches. 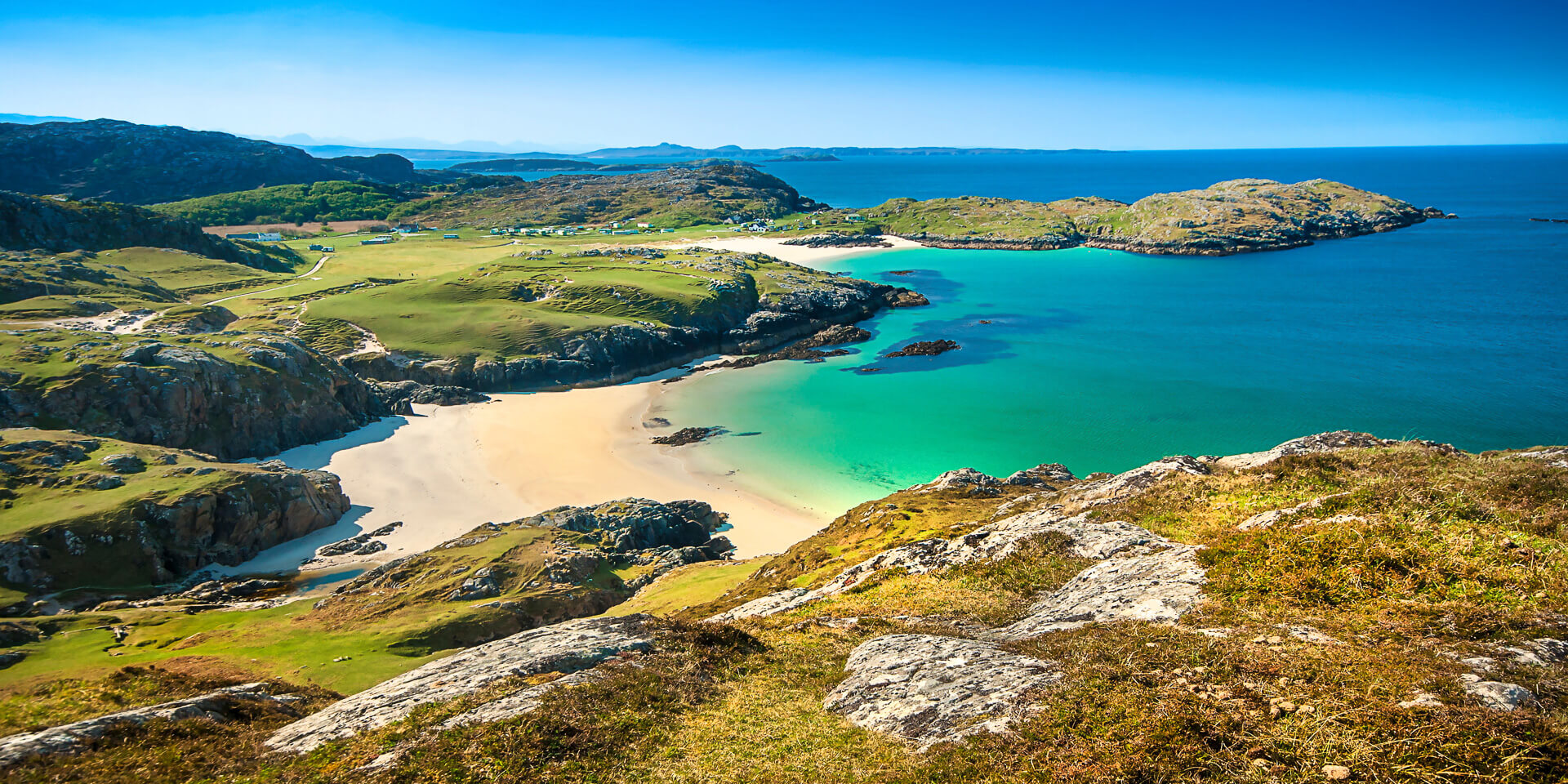 One of the most popular and well-known beaches on the NC500; when you visit you’ll understand why. Achmelvich is beach perfection, resembling a scene from more tropical lands, with white sand and clear blue water. If you’re yet to try wild swimming, this picturesque spot would be a great place to start. 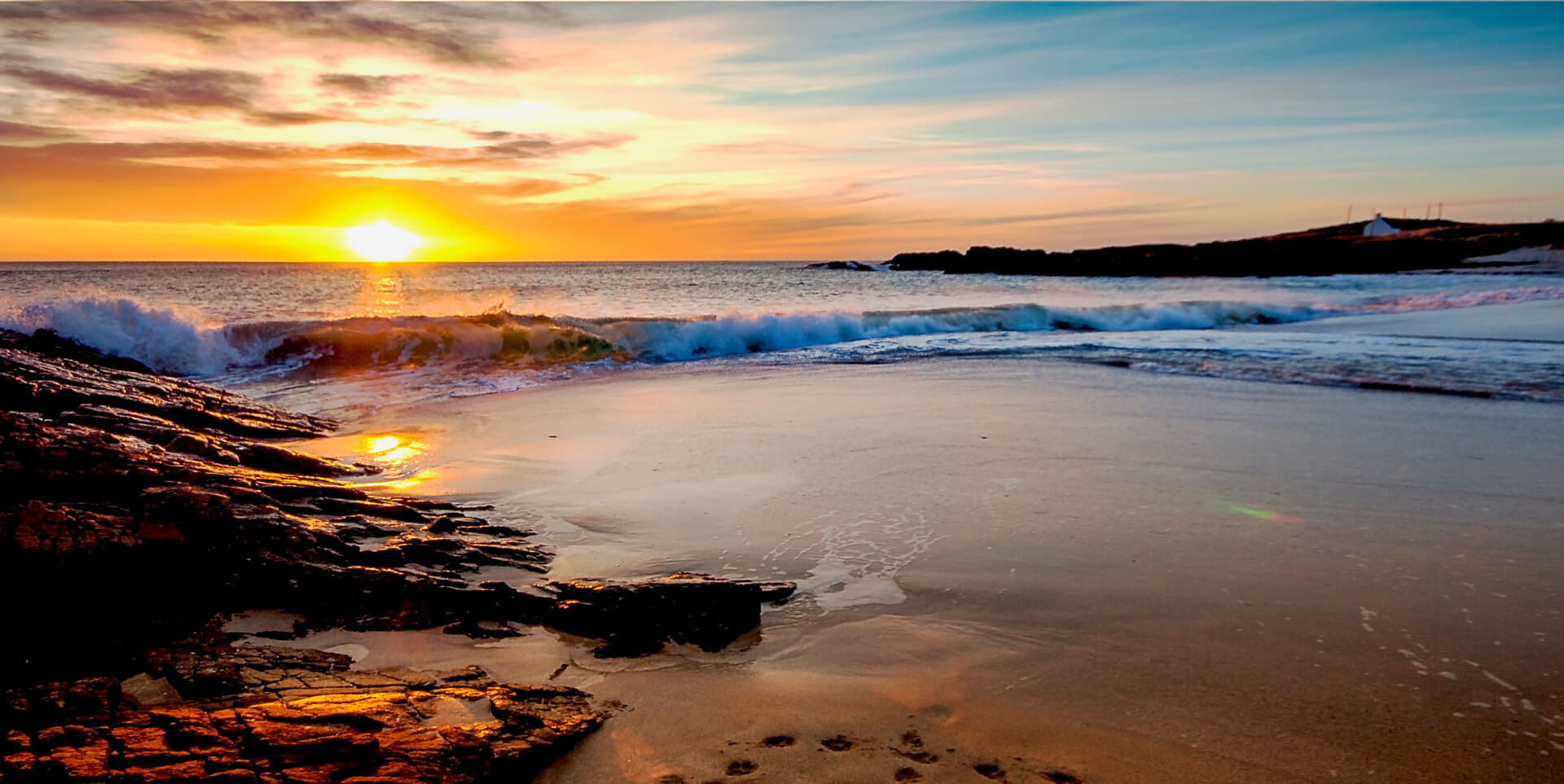 Clachtoll Beach is small and stunningly formed with mountain views thrown in to enhance the already super-scenic display. Look out for Clachtoll’s famous geological feature, Split Rock; one of the many sights included in the North West Highlands Geopark. Take a short walk from the beach to the remnants of An Dùn Iron Age broch. One of the most remote beaches in Scotland, the wildly gorgeous Sandwood Bay is characterised by pink-tinged sand, grassy dunes, and waves rolling towards the shore for over 2 miles. In the distance, the Am Buachaille sea stack is a striking sight to behold. After a long walk Sandwood Bay emerges like a paradise oasis, with a rough Scottish edge. A wide, sweeping arch of white sand extends upwards into the Pentland Firth on a narrow peninsula at the northern tip of Scotland. Balnakeil Beach backs onto impressive sand dunes and the sea greets the shore in many shades of turquoise and blue. Make an afternoon of it, and walk right out to Faraid Head, passing the 1950s radar station along the way. 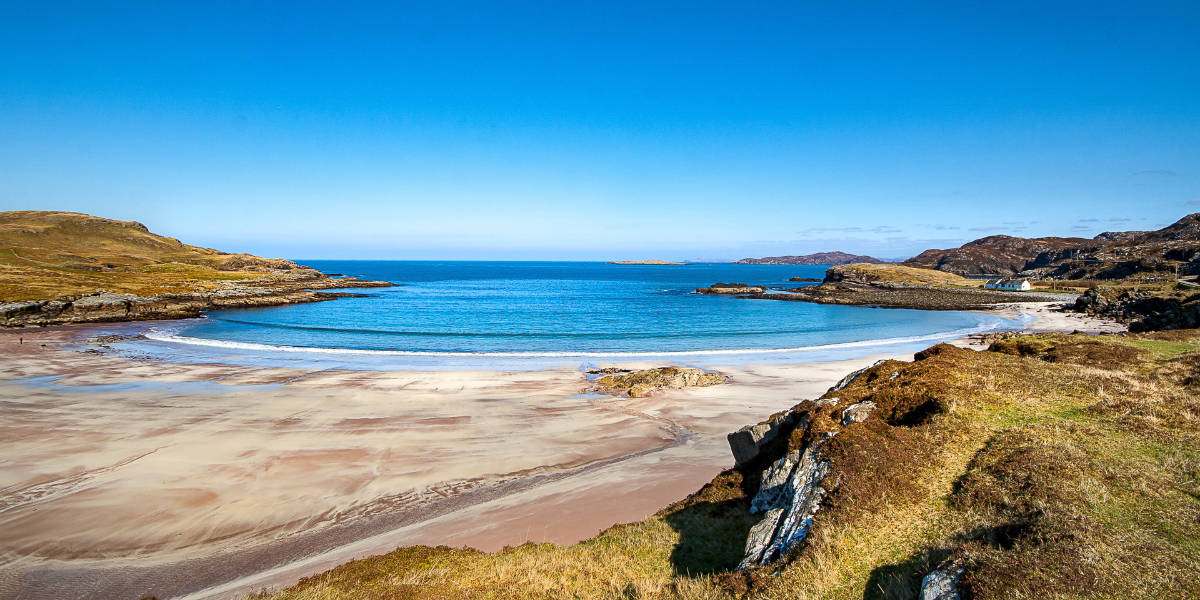 A little to the north is Clashnessie, which has redder sand than its neighbouring beaches. Sheltered from the predominant south westerly winds, it is a great spot to enjoy the water when there’s a bit of a breeze. Visible from the beach is the Clashnessie Falls. Take a short walk upstream from the beach and you will find yourself looking up at the spectacular fifteen-meter falls that transcend from the lochans above. Hailed as one of the most beautiful beaches in the UK, Sango Bay has the ‘wow’ factor from the first moment you set your eyes upon it; from the cliffs and steep dunes, to the smooth sand, scattered rocks and crystal clear waters. Don’t forget to visit Smoo Cave, a short distance along the coast, while you’re there. 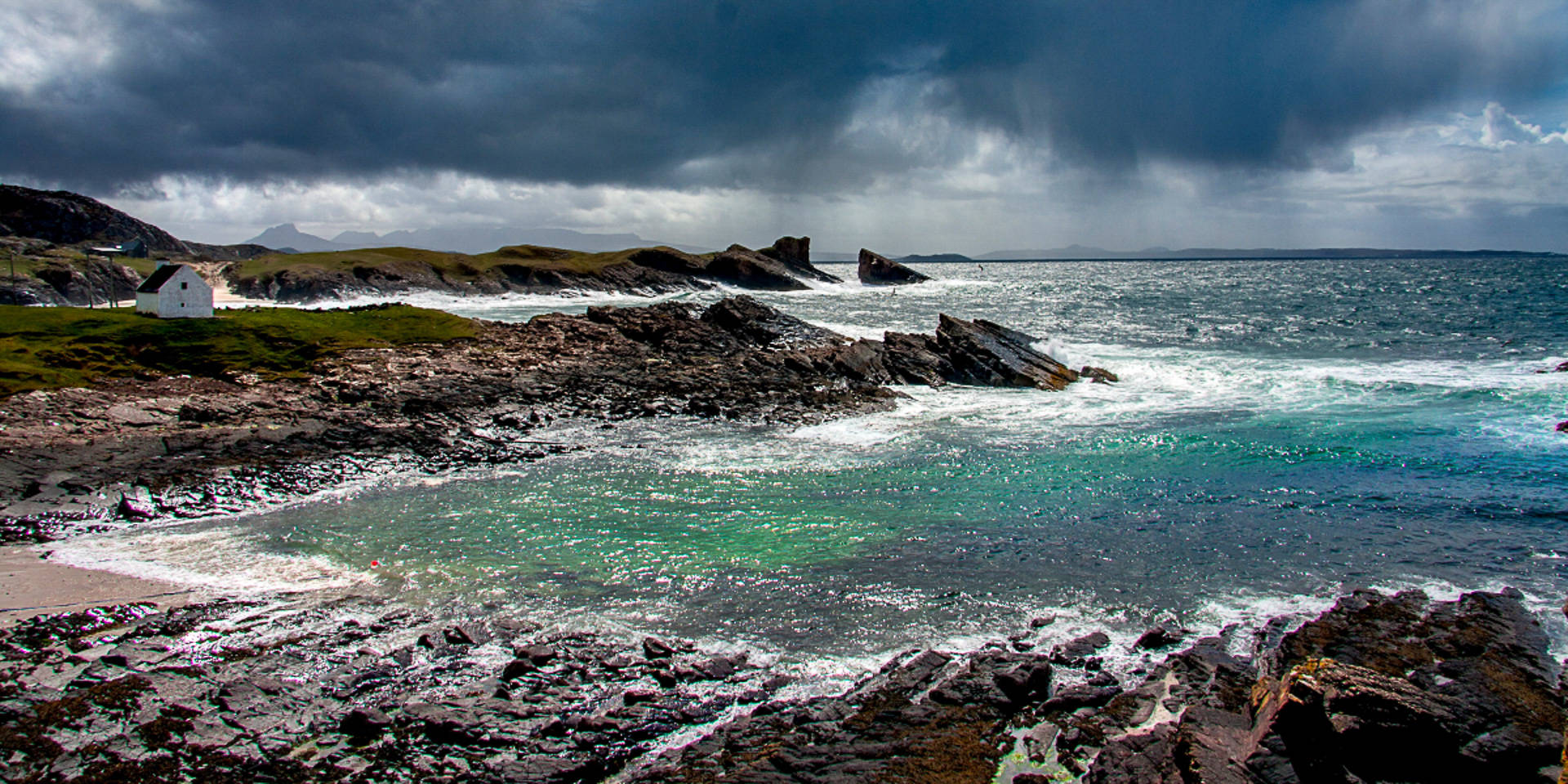 Clachtoll beach is dominated by split rock to the south, which is believed to have once been an arch. History lovers will enjoy the story of the medieval prophet - the Brahan Seer - who predicted that the arch would be rent asunder with such force that it would be heard by the laird of Ledmore’s cattle.

Standing at 200ft high, the Torridonian sandstone sea stack is a sight to behold and a very popular climbing route - although to make the ascent you first have to swim across the 30ft wide channel. Make sure to look out for seabirds, particularly the fulmars nesting on the rock and the nearby cliffs.

Beyond Assynt, this mile-long stretch of golden sand can be seen across the River Naver, from Bettyhill. A gorgeous beach, with ruins of an Iron Age broch, and the chance to spot sea otters and the local seal colony. The tide and position on the river make Torrisdale Bay a popular spot for surfing and salmon fishing.