3 billion years old - and a further 2.5 billion to follow

Ambassadors of the Northwest Highlands Geopark, Inchnadamph Lodge lies at the centre of a landscape unique in the British Isles. The lower ground around Lochinver has peat bogs and lochs between a multitude of rocky outcrops of Lewisian Gneiss, some 3 billion years old.

Above the contorted layers of crystalline, grey and pink banded gneiss sits a dark red-brown sandstone called the Torridon Group laid down by river systems that covered the NW Highlands 1 billion years ago.

The near-horizontal beds up to 2m thick of coarse-grained sandstone have vertical joints which give the mountains characteristic ledges and steep cliffs.

Still higher lie the pale white quartzites of the Cambrian Eriboll Sandstone formation with their characteristic white scree slopes that sometimes look like snow in the sunlight. These were laid down on the shores of the Iapetus Ocean when Scotland was attached to North America.

The marine succession sees the appearance of some of the first fossils found in the UK and passes up into the grey limestones of the Durness Group that surround Inchnadamph Lodge itself. And we are still in rocks here that are slightly less than half a billion years old!

Over hundreds of millions of years, these beds have been uplifted and then worn down and sculpted by erosion - especially during the last ice age (a mere 20,000 years ago), leaving Assynt's spectacular range of isolated mountains Suilven, Canisp, Cul Mor, Cul Beag, Stac Pollaidh and Quinag. Lewisian Gneiss landscape between Inchnadamph and Lochinver, dominated by sandstone mountains of Quinag and Suilven

Famous geologists assembled at the Inchnadamph Hotel and Lodge in September 1912.

Peach and Horne were lifelong friends and co-operated in their geological research for the Geological Survey: unlocking the puzzle of mountain building and providing a fundamental theory to explain why older rocks can lie above younger rocks.

These rocks, which lie in the hills to the east of Inchnadamph and occupy much of the area over to Inverness, once lay in the deep crust and were pushed up and over the marine sequences as the Iapetus ocean closed.

Two continents collided to form the Caledonian mountain chain, one of the first ancient examples recognised anywhere in the world. This set the scene for the later emergence of Plate Tectonics later in the 20th century.

John Horne joined the Scottish branch of HM Geological Survey as an assistant, becoming an assistant to Ben Peach.

Horne and Peach were in much demand to lead excursions in Assynt, and their names appear several times in the Inchnadamph Hotel register. The Lodge, which was an annex in the grounds of the Hotel back in 1912, provided a base for successive groups of geologists; and this tradition continues a hundred years on today!

Atop the small hill overlooking Assynt Loch and Assynt Church is a stone memorial to these two titans of geology, called 'Castor and Pollux', or the 'Heavenly Twins' by their friends. It reads, "To Ben N Peach and John Horne who played the foremost part in unravelling the geological structures of the north west Highlands 1883-1897. An International tribute erected 1930."

It is a fine place to remember their geology expeditions around Assynt and to admire the wondrous diversity of rocks across the loch.

The adjacent image shows geologists, Peach and Horne, in 1912 at Inchnadamph. Horne is top left; Peach is the striking man in the middle with the white beard, as indicated below. 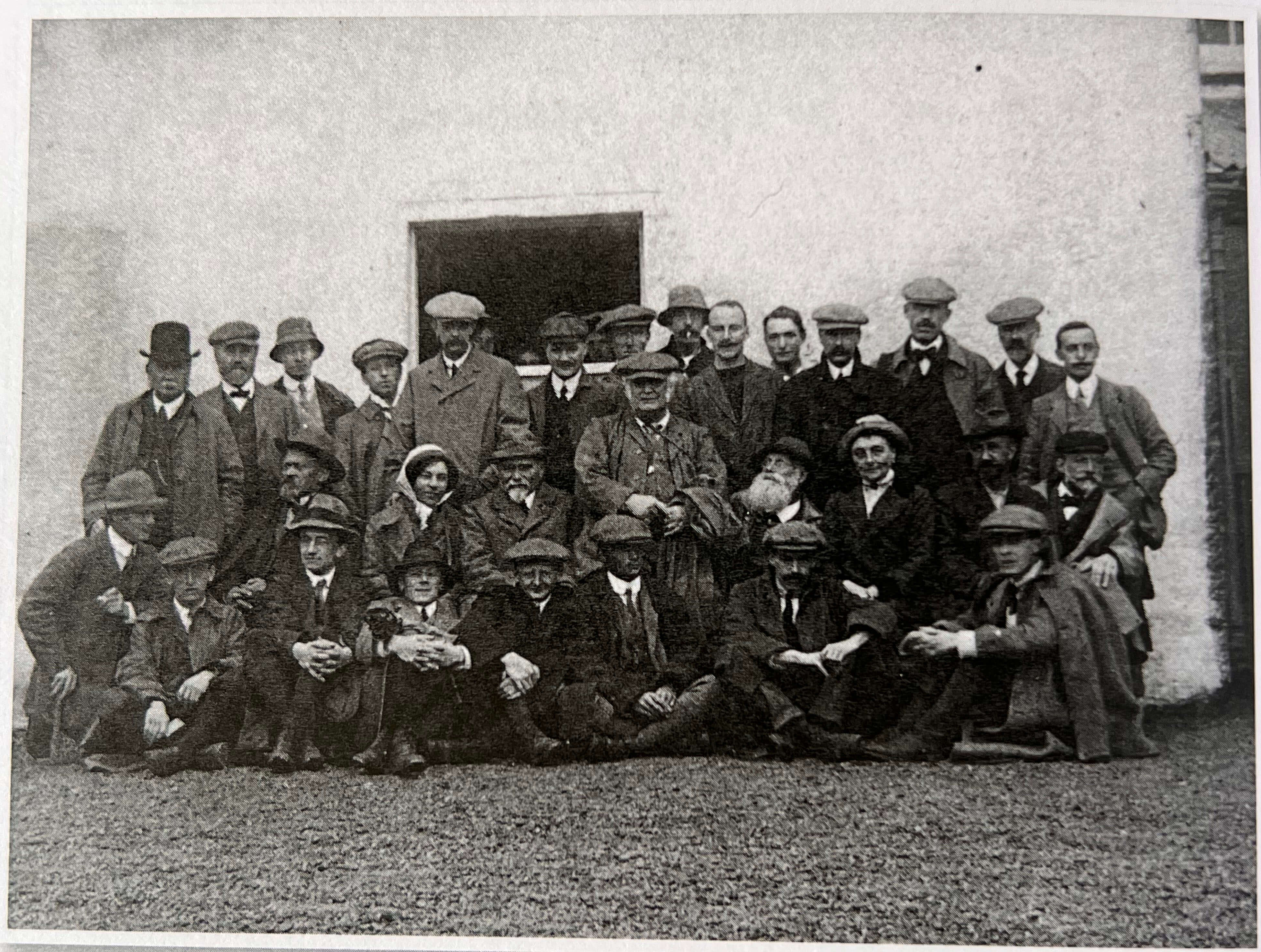 Peach and Horne at Inchnadamph with fellow geologists of the British Association (BA) Excursion to Assynt, 1912 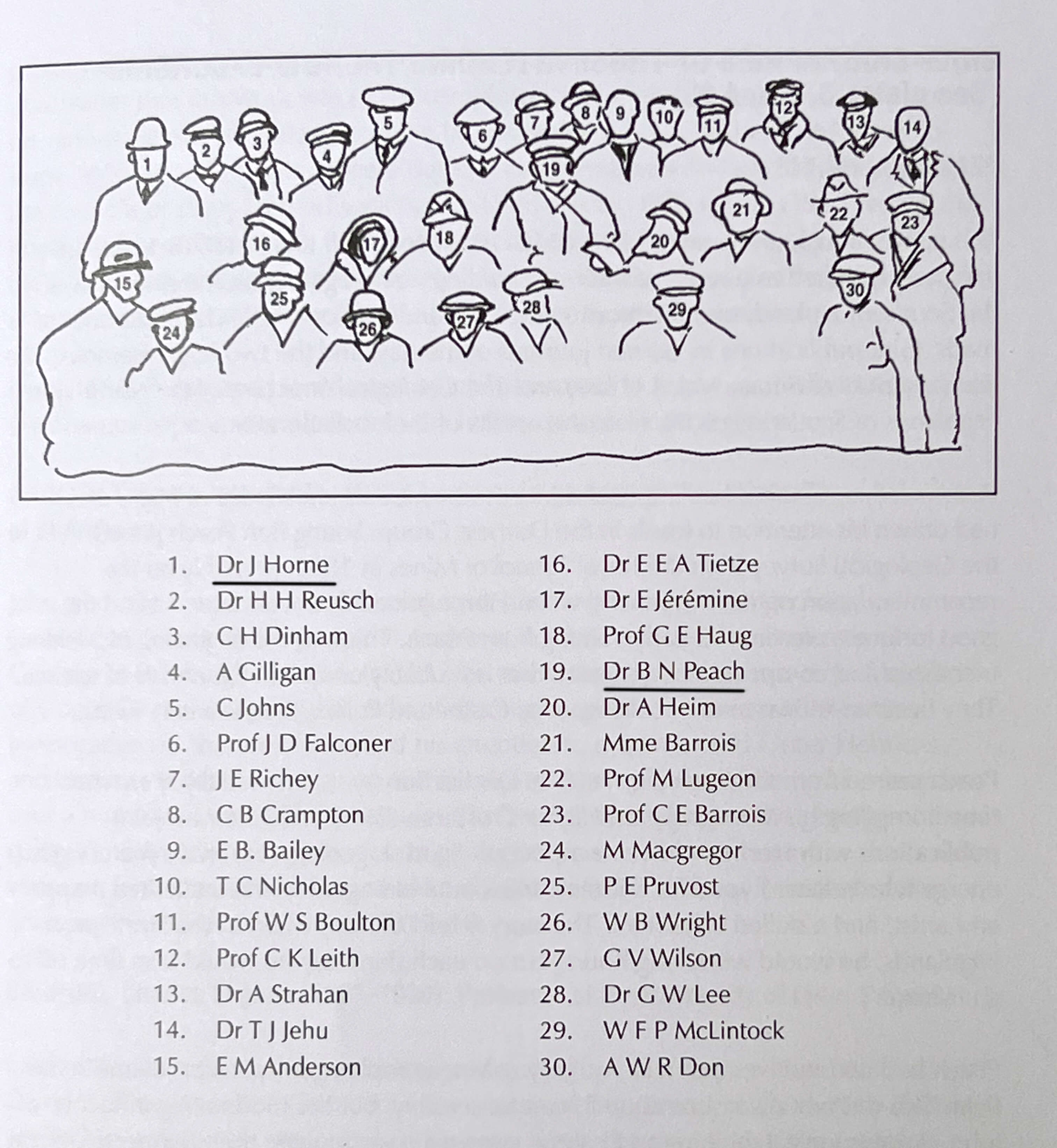 Where geologists come to learn

Bob Holdsworth, Professor of Structural Geology at Durham University and Chair of The Scottish Geology Trust, has been taking his students on geology trips to Inchnadamph Lodge for over 20 years.

"It’s the diversity of rock landscapes all so near to Inchnadamph Lodge that keep us coming back every year. It provides a comfortable base for our field trips out into the four seasons of weather as we explore cliff edges, gorges, deer tracks and bogs.

I have been coming here since I was a student and it’s the best place to teach the foundations of plate tectonics and the different ways in which Earth's oldest rocks have been formed, transformed and eroded."

Bob is also a member of Inchnadamph's Advisory Committee.

A place to see the effects of glaciation

The Assynt area is predominantly a landscape of glacial erosion. Glacial features are present around the region including the huge troughs forming many of the valleys with their lower parts filled with hummocky moraines of till left behind as the glaciers melted.

Higher up are the corries carved into the mountain sides and the beautifully scoured peaks like Suilven and Canisp. All are relics of a time when northern Britain was covered by a series of ice sheets that at their maximum extent were over a kilometre thick.